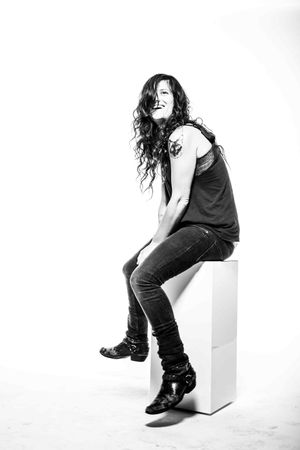 Jen Rosenstein is a native of Los Angeles, where she works as a director, photographer and artist. Rosenstein graduated in 2008 with a BFA in Photography from Art Center College of Design. Her work can be seen on national ad campaigns for McCann Erickson NYC / TBWA\Chiat\Day LA. She shoots Grammy award winning artists like Jason Mraz, Pentatonix, Jennifer Hudson, Foo Fighters and many more. Her most recent published book, Rock & Roll: An Intimate Portrait was released last year, along with her solo exhibit of her journey photographing the music industry.

Rosenstein’s photography is a reflection of her deep relationships within a creative community of musicians, artists, filmmakers and LGBTQ people. While her subjects are strong, her images seek to capture transformation and vulnerability – a trusted emotional exchange between friends, immortalized.

As a woman behind the camera – Rosenstein likes to explore all the ways that femaleness presents, including what it means to take up space in the world as a woman. Music, joy and abundant feeling is the heartbeat of her collaborations, and her series of beautiful, human portraits the result.